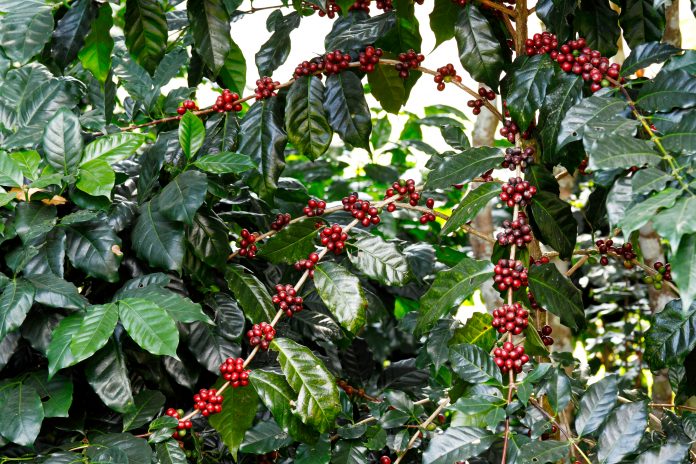 Coffee is a brewed drink prepared from roasted coffee beans, the seeds of berries from certain Coffea species. All fruit must be further processed from a raw material—the fruit and seed—into a stable, raw product; un-roasted, green coffee. To process the berries, the seed is separated from the fruit to produce green coffee. Green coffee is then roasted, a process which transforms the raw product (green coffee) into a consumable product (roasted coffee). Roasted coffee is ground into a powder and mixed with water to produce a cup of coffee.

Coffee is darkly colored, bitter, slightly acidic and has a stimulating effect in humans, primarily due to its caffeine content. It is one of the most popular drinks in the world, and can be prepared and presented in a variety of ways (e.g., espresso, French press, caffè latte, or already-brewed canned coffee). It is usually served hot, although chilled or iced coffee is common. Sugar, sugar substitutes, milk or cream are often used to lessen the bitter taste. It may be served with coffee cake or another sweet dessert like doughnuts. A commercial establishment that sells prepared coffee beverages is known as a coffee shop (not to be confused with Dutch coffeeshops selling cannabis).

Clinical research indicates that moderate coffee consumption is benign or mildly beneficial as a stimulant in healthy adults, with continuing research on whether long-term consumption reduces the risk of some diseases, although some of the long-term studies are of questionable credibility.

The earliest credible evidence of coffee-drinking as the modern beverage appears in modern-day Yemen in southern Arabia in the middle of the 15th century in Sufi shrines where coffee seeds were first roasted and brewed in a manner similar to how it is now prepared for drinking. The Yemenis procured the coffee beans from the Ethiopian Highlands via coastal Somali intermediaries, and began cultivation. By the 16th century, the drink had reached the rest of the Middle East and North Africa, later spreading to Europe.

The two most commonly grown coffee bean types are C. arabica and C. robusta. Coffee plants are now cultivated in over 70 countries, primarily in the equatorial regions of the Americas, Southeast Asia, the Indian subcontinent, and Africa. As of 2018[update], Brazil was the leading grower of coffee beans, producing 35% of the world total. Coffee is a major export commodity as the leading legal agricultural export for numerous countries. It is one of the most valuable commodities exported by developing countries. Green, unroasted coffee is the most traded agricultural commodity, and the coffee trade is the most traded commodity second only to petroleum. Despite the sales of coffee reaching billions of dollars, those actually producing the beans are disproportionately living in poverty. Critics also point to the coffee industry's negative impact on the environment and the clearing of land for coffee-growing and water use. The environmental costs and wage disparity of farmers is causing the market for fair trade and organic coffee to expand.

From Dutch koffie (“coffee”) [from 1582], from Ottoman Turkish قهوه‎ (kahve, “coffee”), from Arabic قَهْوَة‎ (qahwa, “coffee, a brew”). The Arabic word originally referred to wine, a drink which was traditionally mixed and served hot in a similar manner. In Arabic "to brew" utilizes the same triliteral root as wine and intoxicant; see خ م ر‎ (ḵ-m-r) to cover over, presumably with hot water. Other sources instead claim it traces back to the name of the Kaffa region