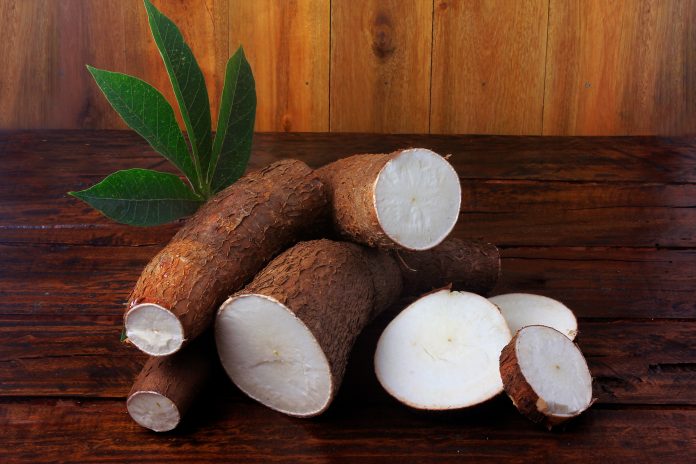 Manihot esculenta, commonly called cassava (/kəˈsɑːvə/), manioc, or yuca (among numerous regional names) is a woody shrub native to South America of the spurge family, Euphorbiaceae. Although a perennial plant, cassava is extensively cultivated as an annual crop in tropical and subtropical regions for its edible starchy tuberous root, a major source of carbohydrates. Though it is often called yuca in parts of Spanish America and in the United States, it is not related to yucca, a shrub in the family Asparagaceae. Cassava is predominantly consumed in boiled form, but substantial quantities are used to extract cassava starch, called tapioca, which is used for food, animal feed, and industrial purposes. The Brazilian farinha, and the related garri of West Africa, is an edible coarse flour obtained by grating cassava roots, pressing moisture off the obtained grated pulp, and finally drying it (and roasting in the case of farinha).

Cassava is the third-largest source of food carbohydrates in the tropics, after rice and maize. Cassava is a major staple food in the developing world, providing a basic diet for over half a billion people. It is one of the most drought-tolerant crops, capable of growing on marginal soils. Nigeria is the world's largest producer of cassava, while Thailand is the largest exporter of cassava starch.

Cassava is classified as either sweet or bitter. Like other roots and tubers, both bitter and sweet varieties of cassava contain antinutritional factors and toxins, with the bitter varieties containing much larger amounts. It must be properly prepared before consumption, as improper preparation of cassava can leave enough residual cyanide to cause acute cyanide intoxication, goiters, and even ataxia, partial paralysis, or death. The more toxic varieties of cassava are a fall-back resource (a "food security crop") in times of famine or food insecurity in some places. Farmers often prefer the bitter varieties because they deter pests, animals, and thieves.