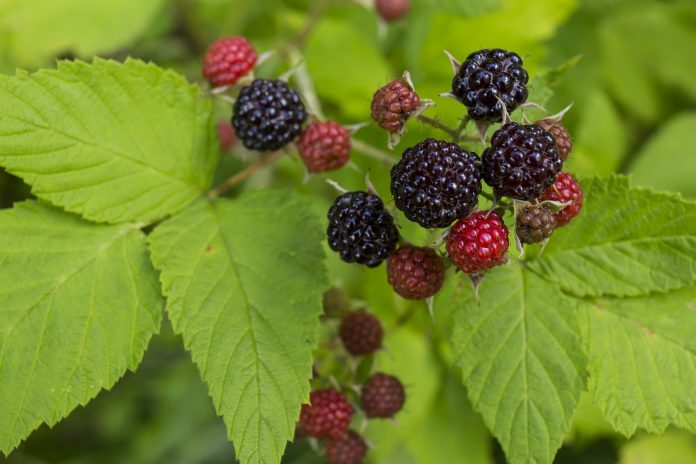 Rubus occidentalis is a deciduous shrub growing to 2 to 3 metres (6.6 to 9.8 ft) tall. The leaves are pinnate, with five leaflets on leaves, strong-growing stems in their first year, and three leaflets on leaves on flowering branchlets. The flowers are distinct in having long, slender sepals 6 to 8 millimetres (0.24 to 0.31 in) long, more than twice as long as the petals. The round-shaped fruit is a 12-to-15-millimetre (0.47 to 0.59 in) diameter aggregation of drupelets; it is edible, and has a high content of anthocyanins and ellagic acid.

Long stems also called canes grow up to 1.8 metres (5.9 ft) in length, usually forming an arch shape, but sometimes upright. Canes have curved, sharp thorns, while youthful canes are unbranched and have a whitish bloom.

Black raspberries are high in anthocyanins. This has led to their being very useful as natural dyes.

The black raspberry is also closely related to the red raspberries Rubus idaeus and Rubus strigosus, sharing the distinctively white underside of the leaves and fruit that readily detaches from the carpel, but differing in the ripe fruit being black, and in the stems being more prickly. The black fruit makes them look like blackberries, though this is only superficial, with the taste being unique and not like either the red raspberry or the blackberry.

As suggested by the common name, black raspberries usually have very dark purple-black fruits, rich in anthocyanin pigments. However, due to occasional mutations in the genes controlling anthocyanin production, yellow-fruited variants ("yellow raspberries") sometimes occur, and have been occasionally propagated, especially in home/farm gardens in the midwestern United States (e.g., Ohio). The yellow-fruited variants of the black raspberry retain that species' distinctive flavor, different from the similar-appearing pale-fruited variants of cultivated red raspberries (generally the Eurasian Rubus idaeus, but with some being the North American Rubus strigosus, and other cultivars representing hybrids between these two widespread species).