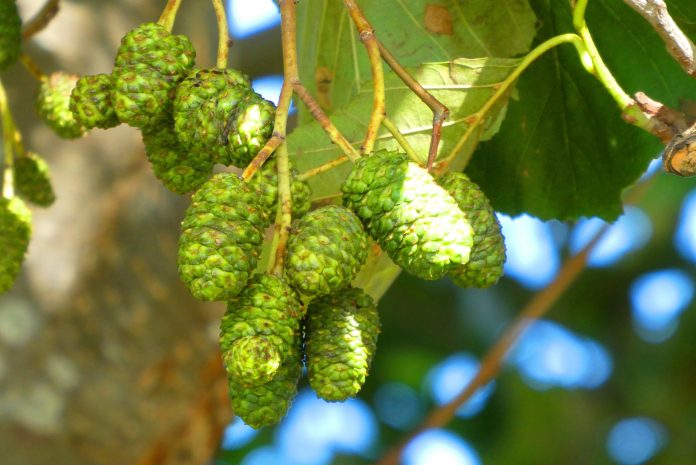 Alder is a common hardwood in North America and it is apreciated for creating a fertile and luxuriant environment for surrounding plants life and animals. It is easy to recognize an alder tree thanks to its little fruiting body, which is called a strobile. Usually, tea is made from leaves and tincture from bark.

Alnus glutinosa, the common alder, black alder, European alder, European black alder, or just alder, is a species of tree in the family Betulaceae, native to most of Europe, southwest Asia and northern Africa. It thrives in wet locations where its association with the bacterium Frankia alni enables it to grow in poor quality soils. It is a medium-sized, short-lived tree growing to a height of up to 30 metres (100 ft). It has short-stalked rounded leaves and separate male and female flowers in the form of catkins. The small, rounded fruits are cone-like and the seeds are dispersed by wind and water.

The common alder provides food and shelter for wildlife, with a number of insects, lichens and fungi being completely dependent on the tree. It is a pioneer species, colonising vacant land and forming mixed forests as other trees appear in its wake. Eventually common alder dies out of woodlands because the seedlings need more light than is available on the forest floor. Its more usual habitat is forest edges, swamps and riverside corridors. The timber has been used in underwater foundations and for manufacture of paper and fibreboard, for smoking foods, for joinery, turnery and carving. Products of the tree have been used in ethnobotany, providing folk remedies for various ailments, and research has shown that extracts of the seeds are active against pathogenic bacteria.