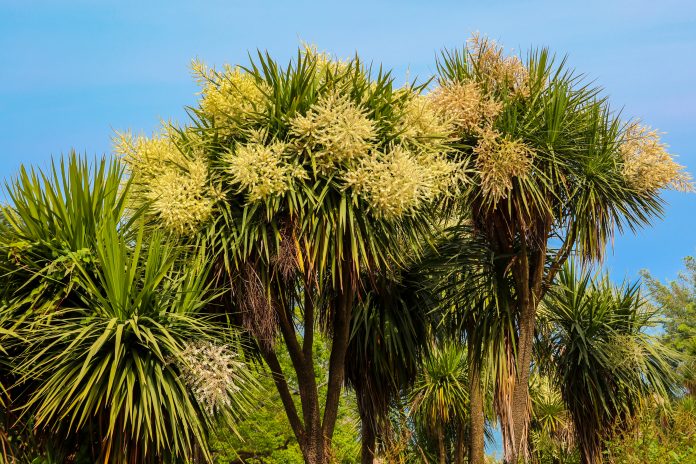 It grows up to 20 metres (66 feet) tall with a stout trunk and sword-like leaves, which are clustered at the tips of the branches and can be up to 1 metre (3 feet 3 inches) long. With its tall, straight trunk and dense, rounded heads, it is a characteristic feature of the New Zealand landscape. Its fruit is a favourite food source for the New Zealand pigeon and other native birds. It is common over a wide latitudinal range from the far north of the North Island at 34° 25′S to the south of the South Island at 46° 30′S. Absent from much of Fiordland, it was probably introduced by Māori to the Chatham Islands at 44° 00′S and to Stewart Island at 46° 50′S. It grows in a broad range of habitats, including forest margins, river banks and open places, and is abundant near swamps. The largest known tree with a single trunk is growing at Pakawau, Golden Bay. It is estimated to be 400 or 500 years old, and stands 17 metres (56 feet) tall with a circumference of 9 metres (30 feet) at the base.

Known to Māori as tī kōuka, the tree was used as a source of food, particularly in the South Island, where it was cultivated in areas where other crops would not grow. It provided durable fibre for textiles, anchor ropes, fishing lines, baskets, waterproof rain capes and cloaks, and sandals. Hardy and fast growing, it is widely planted in New Zealand gardens, parks and streets, and numerous cultivars are available. The tree can also be found in large numbers in island restoration projects such as Tiritiri Matangi Island, where it was among the first seedling trees to be planted. It is also grown as an ornamental tree in higher latitude Northern Hemisphere countries with maritime climates, including parts of the upper West Coast of the United States, Canada and the British Isles, where its common names include Torbay palm and Torquay palm. It does not do well in hot tropical climates like the Caribbean, Queensland, Southeast Asia or Florida.[citation needed]