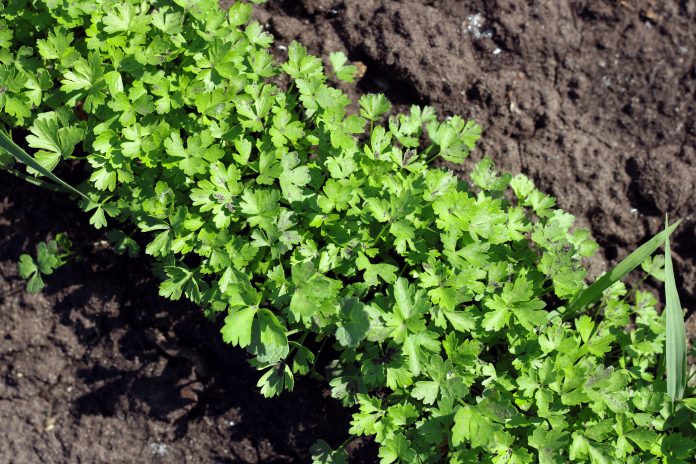 Parsley or garden parsley (Petroselinum crispum) is a species of flowering plant in the family Apiaceae that is native to the central and eastern Mediterranean region (Sardinia, Lebanon, Israel, Cyprus, Turkey, southern Italy, Greece, Portugal, Spain, Malta, Morocco, Algeria, and Tunisia), but has been naturalized elsewhere in Europe, and is widely cultivated as an herb, and a vegetable.

Where it grows as a biennial, in the first year, it forms a rosette of tripinnate leaves, 10–25 cm (4–10 in) long, with numerous 1–3 cm (0.4–1.2 in) leaflets and a taproot used as a food store over the winter. In the second year, it grows a flowering stem with sparser leaves and umbels with yellow to yellowish-green flowers.

Parsley is widely used in European, Middle Eastern, and American cuisine. Curly leaf parsley is often used as a garnish. In central Europe, eastern Europe, and southern Europe, as well as in western Asia, many dishes are served with fresh green chopped parsley sprinkled on top. Flat leaf parsley is similar, but it is easier to cultivate, and some say it has a stronger flavor. Root parsley is very common in central, eastern, and southern European cuisines, where it is used as a snack or a vegetable in many soups, stews, and casseroles. It is believed to have been originally grown in Sardinia (Mediterranean area) and was cultivated in around the 3rd century BC. Linnaeus stated its wild habitat to be Sardinia, whence it was brought to England and apparently first cultivated in Britain in 1548.