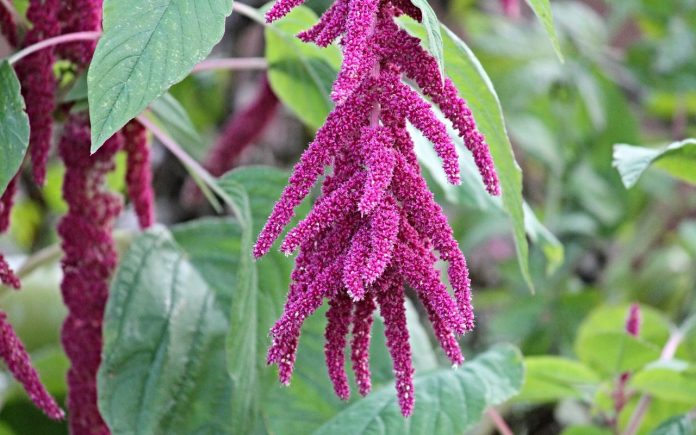 The amaranth is one of the oldest useful plants and is spread all over the world, there are about 70 species. The seeds of some species are a high-quality gluten-free cereal with a high protein content. It is therefore well suited for people suffering from coeliac disease and also neurodermatitis. However, the leaves are the one which are mainly used for medicinal purposes.

A diet with amaranth leaves and seeds keeps you physically and mentally young. Amaranth is also available as potted plants for the windowsill.

The amaranth is native to America and Europe. It prefers to grow in sunny locations. The annual plant grows up to 200 centimetres high. The ovoid leaves are dark green to red-green. The stem is strong. The flowers appear between July and August. From the amaranth flowers, about 50,000 seeds per plant develop until autumn. The round disc-shaped seeds are less than 1 mm thick.

Harvest period
– Leaves: May to July,
– Seeds: September to October.

Pour 250 ml of hot water over 1 tablespoon of dried leaves, leave to stand for 8 minutes and strain.

Boil 1 cup of seeds in 2 cups of water and let it swell on low heat for 30 minutes, if necessary add some more hot water.

As a vegetable, you can prepare the fresh leaves like spinach.

The amaranth has been used in America for many thousands of years as a medicinal plant and as a type of grain. In Europe its use dates back to the Stone Age, but only the leaves were used for nutrition.

The Incas and Aztecs lived mainly on amaranth seeds, which could almost completely replace meat. The Spanish conquerors banned amaranth because it was the sacred plant of the population. The consequence was a great famine with over 10 million dead.

In the last 30 years the amaranth has been rediscovered as a valuable medicinal and food product and is now cultivated agriculturally. Amaranth products are available in many organic shops.

The amaranth grows almost by itself: sow the seeds in spring (when no more frosts are expected) on the moist soil in a sunny location and you are ready.

It should be remembered that one plant produces between 30,000 and 60,000 seeds, which are distributed throughout the garden and remain germinable for many years. With only 100 grams of seeds you can easily grow a whole hectare of plants.

Harvest leaves for salad and vegetables before flowering. For teas, also harvest the leaves before flowering and dry them in an airy and shady place. Harvest seeds when the seeds ripen. It is best to cut off the plant and hang it over baking paper.

Amaranthus is a cosmopolitan genus of annual or short-lived perennial plants collectively known as amaranths. Some amaranth species are cultivated as leaf vegetables, pseudocereals, and ornamental plants. Most of the Amaranthus species are summer annual weeds and are commonly referred to as pigweeds. Catkin-like cymes of densely packed flowers grow in summer or autumn. Amaranth varies in flower, leaf, and stem color with a range of striking pigments from the spectrum of maroon to crimson and can grow longitudinally from 1 to 2.5 metres (3 to 8 feet) tall with a cylindrical, succulent, fibrous stem that is hollow with grooves and bracteoles when mature. There are approximately 75 species in the genus, 10 of which are dioecious and native to North America with the remaining 65 monoecious species endemic to every continent from tropical lowlands to the Himalayas. Members of this genus share many characteristics and uses with members of the closely related genus Celosia. Amaranth grain is collected from the genus. The leaves of some species are also eaten.

Borrowed from French amarante, or directly from its etymon Latin amarantus (the word ending influenced by plant names derived from Ancient Greek ἄνθος (ánthos, “a bloom, blossom, flower”)), from Ancient Greek ἀμάραντος (amárantos, “eternal, undying, unfading, unwilting; amaranth; everlasting flower”) (modern Greek αμάραντος (amárantos)), from ᾰ̓- (a-, the alpha privativum, a suffix forming words having a sense opposite to the word or stem to which it is attached) +

How is Sleep important for Health?