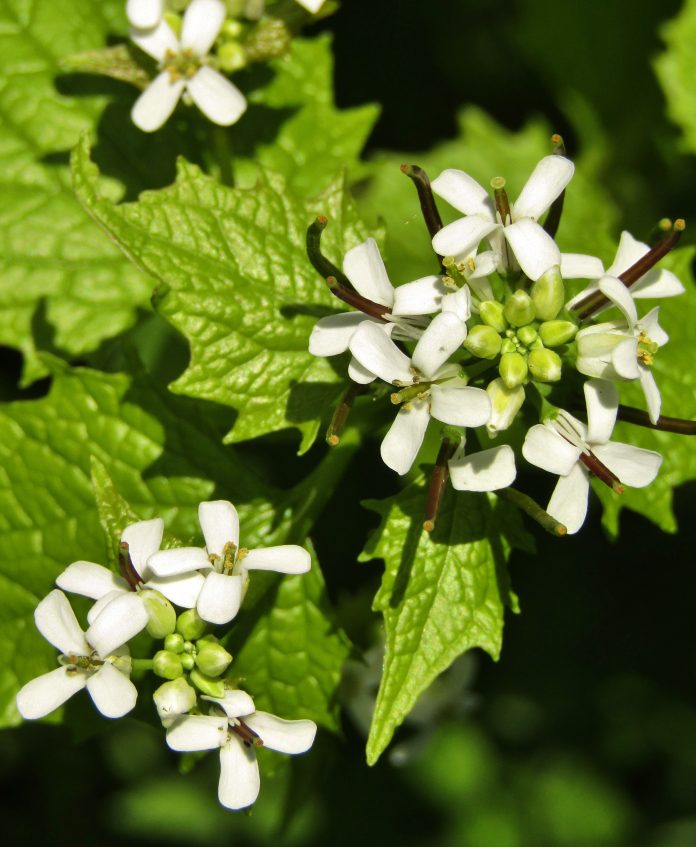 The garlic mustard is a common plant from the mustard family. It stands out for its garlic aroma. This makes it a wild vegetable that can still spoil you with this spicy taste during the wild garlic season. Furthermore, as tea, garlic mustard has some healing effects for the respiratory organs as well as against wounds.

Alliaria petiolata, or garlic mustard, is a biennial flowering plant in the mustard family (Brassicaceae). It is native to Europe, western and central Asia, north-western Africa, Morocco, Iberia and the British Isles, north to northern Scandinavia, and east to northern Pakistan and Xinjiang in western China.[citation needed]

In the first year of growth, plants form clumps of round, slightly wrinkled leaves, that when crushed smell like garlic. The plants flower in spring of the next year, producing cross shaped white flowers in dense clusters. As the flowering stems bloom they elongate into a spike-like shape. When flowering is complete, plants produce upright fruits that release seeds in mid-summer. Plants are often found growing along the margins of hedges, giving rise to the old British folk name of jack-by-the-hedge. Other common names include: garlic mustard, garlic root, hedge garlic, sauce-alone, jack-in-the-bush, penny hedge and poor man's mustard. The genus name Alliaria, "resembling Allium", refers to the garlic-like odour of the crushed foliage.

All parts of the plant, including the roots, give off a strong odour like garlic.

What are Yoga’s Benefits?