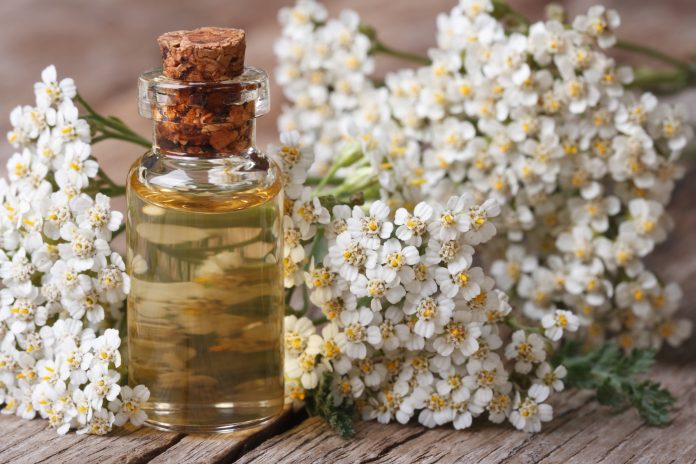 Yarrow is a popular classic medicinal plant that can be used for the digestive organs and gynaecological problems. It grows in meadows and along roadsides. Externally, it can be used similarly to chamomile.

Yarrow is native to the whole Europe, up to the Arctic Circle. It prefers sunny, dry locations on meadows, pastures and roadsides. Yarrow is a perennial, perennial plant, i.e. some of its leaves remain above the earth’s surface even in winter.

In spring, the rhizome sprouts a rosette of pinnate leaves. Later a stem grows on which the flowers are formed. The stem is tough and pithily on the inside. The flowers form a false umbel. They are small, white and sometimes even slightly pink.

Yarrow can be used in diferent ways.

Externally, yarrow can be used in baths, for washing or compresses. In full baths, yarrow tea is suitable, for example, against neuralgia. External use is also suitable against ulcers, poorly healing wounds and psoriasis. Yarrow can also be found in many mixed teas, especially in women’s teas.

The ability of the Yarrow to promote the reflux of blood to the heart in the veins should also be emphasized. This improves the circulation and has a positive effect on venous complaints such as varicose veins, thick swollen feet, circulatory disorders of the heart and shop window disease.

The freshly pressed yarrow juice is particularly valuable. However, it must be very fresh and under no circumstances should it already be fermented. You can take this juice; 3 times a day a teaspoon diluted in a glass of water. Traditionally, yarrow has been used to treat injuries caused by iron, for example cuts from knives.

The essential oil of yarrow is very expensive, but a precious rarity. Diluted it can be used for massages, compresses, sitz baths, foot baths and in the fragrance lamp. Diluted and rubbed on forehead and neck, it helps against headaches, for example, but also against many other uses listed above.

Due to its skin-healing effect, yarrow is also very suitable for creams and ointments. People with sensitive skin or allergic tendencies can get meadow dermatitis from yarrow. In this case one should avoid skin contact with the yarrow.

The gardening of the yarrow, which is so often found in the wild, is more difficult than one might think. The yarrow likes sunny locations. The soil can be sandy or loamy.

If yarrow seeds are obtained, they can also be sown in spring, preferably in small pots. The seeds can only germinate for one year, so you should use them quickly. As soon as the young plants have grown a little, they can be put outdoors. If it feels comfortable in one location, it will come back in the next few years. However, as it sprouts relatively late, it is sometimes overgrown by weeds before then. Fully grown plants can also be propagated by dividing the rootstocks.

In the flowering period, cut off the whole flowering herb about a hand’s breadth above the ground. Then tie small bundles of the plants and hang them in a dry, shady place with the flowers facing down. When the plants are dry, hang them up, cut them up (preferably with scissors) and store them in a cool, dry place away from light.

Yarrow flower by a pond, UK.

Achillea millefolium, commonly known as yarrow (/ˈjæroʊ/) or common yarrow, is a flowering plant in the family Asteraceae. It is native to temperate regions of the Northern Hemisphere in Asia and Europe and North America. It has been introduced as a feed for livestock in New Zealand and Australia, where it is a common weed of both wet and dry areas, such as roadsides, meadows, fields and coastal places.

In New Mexico and southern Colorado, it is called plumajillo (Spanish for 'little feather') from its leaf shape and texture. In antiquity, yarrow was known as herba militaris, for its use in stanching the flow of blood from wounds. Other common names for this species include gordaldo, nosebleed plant, old man's pepper, devil's nettle, sanguinary, milfoil, soldier's woundwort, thousand-leaf, and thousand-seal.

Which Vitamins Are Important For Menopause?